Many things have been going for Final Fantasy XIV ever since the Revenge of the Horde Patch 3.3 hit Eorzea’s shores, and one of the most notable additions in the patch, is the new daily beast tribe quests. And finally, after two long years, there will finally be a quest with the beast tribe that […]

Many things have been going for Final Fantasy XIV ever since the Revenge of the Horde Patch 3.3 hit Eorzea’s shores, and one of the most notable additions in the patch, is the new daily beast tribe quests. And finally, after two long years, there will finally be a quest with the beast tribe that should’ve had a beast tribe quest since the beginning. It’s been a long time coming to the point of overdue, but it’s always better late than never. So without further ado, say hello again to the moogles. Don’t worry, they don’t charge anything to do their dailies!

Before you can engage on these quests, you first have to finish the Main Scenario Quests Into the Aery, Laying the First Brick, and Tricks and Stones. Once those are out of the way, you can now begin your daily beast tribe questing by talk to Seething Stonemason in Churning Mists (x15.7,y28.8), which is a zone in Dravinia, then talk to the moogle quest-givers at Bahrr Lens, which is on the same map (x27, y 34). 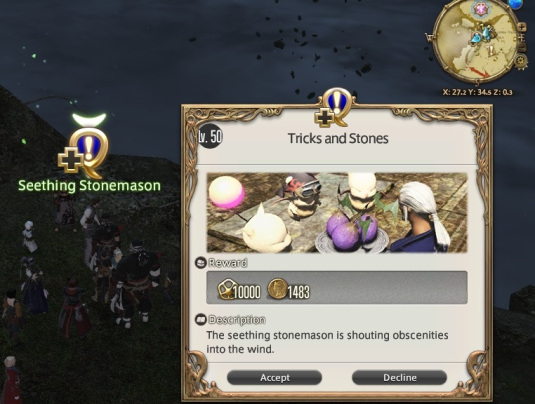 On the other hand, with the sidequests, you can earn carved kupo nuts, which can be used to buy crafting materials from Mogmul Mugbelly; elemental crystals (fire, ice, wind, earth, water, lightning), which are crafting catalysts. More crafting, more FFXIV gil. Another reward from these quests would be reputation points; and like other beast tribes, earning enough reputation with Moogles will grant you access to more advanced beast tribes, which in turn yield better rewards. And with trusted and sworn tier daily quests, you will be able to buy for gil unique and untradeable items such as Meandering Mog Slippers, Wind-up Dragonet, and Cloud Mallow. So earn that reputation!

Moogles are a staple of the Final Fantasy franchise. So now that they’ve finally earned a much-deserved quest line in Eorzea, it’s only right that you show these furry fairies some love.