An MMORPG’s community is as important as any aspect of the game in terms of making a player stay playing. If an MMORPG like Final Fantasy XIV has an awful community as if it is compared to a game having a bad gameplay, more likely players will quit. For me, it is a legitimate reason […]

An MMORPG’s community is as important as any aspect of the game in terms of making a player stay playing. If an MMORPG like Final Fantasy XIV has an awful community as if it is compared to a game having a bad gameplay, more likely players will quit. For me, it is a legitimate reason to completely forget my own account and stop playing entirely.

The FFXIV Community in a Nutshell

Here we have a great example of why community attitude is important and thus what keeps him from playing the game. This is a post by JackalOsiris in Reddit:

I recently started playing a few months back, not seriously but just dabbling. Playing the low level dungeons on my lancer/dragoon, running around with the main story quests. Then, Last week I made 50 and completed the story dungeons for Realm Reborn.

With this done I decided to look at crafting and gathering. After asking in novice chat someone friended me and we talked about the system. They then spent time creating me some mining gear, showed me good places to stake out, and then explained ways to level quickly.

Yesterday, I joined a free company for the first time and one of the guys asked me why my armor was so low. “Didn’t you complete your class quests?” He asked. Well I thought I had but he quickly showed me I had not. He then crafted me a full set of level 52 armor, another guy crafted me some jewellery. I just met these guys only 20 minutes prior…

The generosity of this game astounds me. I have played several MMOs, some quite seriously (raiding, PvP) but never have I encountered such a friendly and generous community. It has made me want to continue my subscription after considering cancelling. Thank you, and I promise to pass it on. 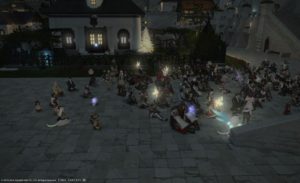 Imagine, just with a simple gesture of generosity, you get someone inspired and love the game even more. It’s as if FFXIV is not an awesome game. It is a great game in the first place but became even more because of having a great community. That is how big of an impact a community is for a game. Now we can assure that he keeps his FF14 Account and continue on playing. What a nice story indeed.

Let us continue on to the last part of the player suggestion on what he thinks should do to Astrologian so that it can be legit in Final Fantasy XIV as a standalone healer. Now, you cannot pick being an Astrologian because White Mage and Scholar are too good....